My Neighbor Totoro (となりのトトロ, Tonari no Totoro?), or My Neighbour Totoro on UK DVD box titles, is a 1988 animated movie written and directed by Hayao Miyazaki and produced by Studio Ghibli. It won the Animage Anime Grand Prix prize in 1988. This movie was originally released in the United States in VHS format with the title, My Friend Totoro.[1]

Troma Films, under their 50th St. Films banner, produced a 1993 dub of the movie co-produced by Jerry Beck. It was released on VHS and DVD by Fox Video. Troma's and Fox's rights to this version expired in 2004. The movie was re-released by Disney on March 7, 2006.[2] It features a new dub cast. This DVD release is the first version of the movie in the United States to include both Japanese and English language tracks, as Fox did not have the rights to the Japanese audio track for their version.

Two girls, Satsuki and her younger sister named Mei, move to a house in the country with their father to be closer to their hospitalized mother. Mei discovers one day a giant creature named Totoro who lives in the forest by their house. One day, when the girls are waiting for their dad by the bus stop, they both see Totoro and a cat-bus. Later, Mei decides to run away to try to find her mother at the hospital, and gets lost. Satsuki looks for Totoro, who gives her a ride on the cat-bus and helps her find Mei. As the movie ends, the girls are seen delivering an ear of corn to their mom to help her get well.

Satsuki Kusakabe (草壁サツキ, Kusakabe Satsuki?)
A girl around ten years old. Satsuki is Mei's older sister. Satsuki is the traditional name of the fifth month of the Japanese calendar, the equivalent of the English May.
Mei Kusakabe (草壁メイ, Kusakabe Mei?)
Satsuki's sister who is around four years old. Her name deliberately echoes her sister's, May being the fifth month, reflecting the fact that the story originally featured one girl, who was then divided into an older and younger sister. The widely-distributed promotional image for the movie of a girl standing next to Totoro at a bus stop reflects the earlier conception with a single child.
Tatsuo Kusakabe (草壁タツオ, Kusakabe Tatsuo?)
The girls' father, who works in the archaeology and anthropology departments of a Tokyo university.
Yasuko Kusakabe (草壁靖子, Kusakabe Yasuko?)
The girls' mother, recovering from an unnamed illness (confirmed by Miyazaki as being tuberculosis[3]) at Shichikokuyama Hospital, which is noted for its tuberculosis treatment program. When Miyazaki was a young boy, his mother had tuberculosis.
Totoro (トトロ?)
A grey and white, friendly forest spirit, whose appearance is a combination of an owl, a cat, and a tanuki and is at least three meters tall. Totoro is Mei's mispronunciation of torōru, the Japanese pronunciation of troll as a loanword. There are two similar, smaller creatures in the movie, also referred to as totoro; the big grey Totoro is named "Ō-Totoro", or "Miminzuku", the middle is "Chū-Totoro", or "Zuku", and the smallest is "Chibi-Totoro", or "Mini". These names do not appear in the movie itself, but are used in ancillary materials.
Kanta Ōgaki (大垣寛太, Ōgaki Kanta?)
A preteen boy of their village, ambivalent towards Satsuki. This character resembles Miyazaki in his fondness for cartoons and airplanes.
"Granny" or "Nanny" (お祖母ちゃん, Obaachan?)
Kanta's grandmother, who sometimes takes care of the girls.
Catbus (ネコバス, Neko basu?)
A cat with hollow insides, serving as a bus for Totoros. It is based on the Japanese superstition that if a cat grows old enough, it gains magical shape-changing powers, and is called a bake neko.[4] Bake neko are mentioned in several Ghibli movies.

One of the most significant things to point out in My Neighbor Totoro is that the mother is absent from the home. According to Takie Sugiyama Lebra, “the [Japanese] mother is characterized as having suffered hardships” (154).[5] This is true in Totoro, as Mei and Satsuki’s mother is hospitalized with an unnamed illness. The mother’s absence is significant because “at home, the husband depends upon the wife for domestic care. The husband is helpless in housekeeping tasks, such as doing the laundry, cooking, cleaning, and child rearing” (52).[5] In the absence of her mother, it is then Satsuki’s job to take over household tasks with Nanny’s help. This is illustrated several times throughout the movie.

One such illustration is when Satsuki prepares breakfast and lunch for her father and Mei before she leaves for school. This is a task that would normally fall to the mother. Also, the various cleaning and garden tasks that Satsuki and Mei often had the help of Nanny to complete would have also normally been the main responsibility of the mother to complete.

Mei and Satsuki’s father demonstrates both typical and atypical characteristics of a traditional Japanese father. According to Peter Tasker, “Japanese children are accustomed to never seeing their father on the weekdays, and only for short periods at weekends. A husband’s proper field of endeavor is the company” (101).[6] This is only somewhat accurate in Mei and Satsuki’s relationship with their father. Although their father is often away working at the university or visiting their mother in the hospital, he is by no means an absentee father. He is seen working at a desk while Mei plays outside and spending time with his daughters before their bedtime. Many scholarly critiques of Japanese culture would lead one to believe that this is not the norm.

The house into which the Kusakabe family moves is an accurate portrayal of a typical, rural, Japanese home. The sliding doors that the father opens when they first move into the house are common architectural features. These doors are meant to be opened during the day, weather permitting, and closed at night. Another feature to point out about the house itself is the way the foundation is constructed. “Japanese houses do not have cellars but are built with a foundation of shallow concrete, or a single row of cement blocks. On top of this type of foundation is placed a row of heavy timbers” (33).[7] This can be seen clearly when Mei crawls under the house in pursuit of one of the smaller totoros.

As for Totoro, he lives in a tree demarcated by a shimenawa (braided straw rope for shinto). The tree is called shinboku (sacred tree). Shinto is the traditional religion of Japan and some consider many of Hayao Miyazaki’s movies—including Totoro—to have Shintoist themes,.[8][9] and interpret Totoro as a kami spirit of the Shinto religion.[10][11] But Miyazaki says "this movie [Totoro] has nothing to do with that [Shinto] or any other religion."[10]

The community in which Satsuki and her family have moved is a typical agricultural town. The rice paddies are visible throughout the movie. Rice cultivation is one of the most important industries in Japan, as rice is a staple of the Japanese diet. The home that Satsuki and Mei live in is more spacious than what would be available in a city. Also, the scene where Nanny, Mei, and Satsuki are washing vegetables shows the near self-sufficiency of these farming communities.

The bath scene is also demonstrative of archetypal Japanese life. “The bathtub is more like a small swimming pool than a tub” (38).[7] As seen in the movie, several people bathe together at once. It is considered rude to enter the tub without first washing, as shown by Satsuki before she enters the tub with her father and Mei. These bathtubs are heated usually by small, well-tended coal burners under the tub.

Another cultural manifestation is the scene that shows the family sleeping. Often, the living room is converted into a bedroom where the whole family sleeps together on mats called futon. This sleeping arrangement is space-efficient and accommodates for smaller housing in a country where living space is severely limited. Mei is sleeping between Satsuki and her father, which is the usual arrangement—with the youngest in the middle.

In one scene, Satsuki is shown preparing the family's lunch in traditional bento style. A bento is a compartmentalized lunch box usually with only one or two tiers. Food is arranged to be aesthetically pleasing. Bentos are extremely common as lunch boxes for children, adults, and even those who stay at home, as Mei does when Satsuki goes to school.

Other passive cultural references include:

My Neighbor Totoro was released by Studio Ghibli as a double feature with Isao Takahata's Grave of the Fireflies in August 1988. There are two theories for this: one was that Totoro would not be successful. Another theory is that Grave of the Fireflies was believed to be too depressing for audiences by itself, and thus needed a lighter animation to accompany it.[12] The late Yoshifumi Kondo provided character designs for both movies.

In 1993, Fox released the first English-language version of My Neighbor Totoro, produced by John Daly and Derek Gibson (the producers of The Terminator) with co-producer Jerry Beck. Fox and Troma's rights to the movie expired in 2004. Disney's English language version premiered on October 23, 2005; it then appeared at the 2005 Hollywood Film Festival. The Turner Classic Movies cable television network held the television premiere of Disney's new English dub on January 19, 2006, as part of the network's salute to Hayao Miyazaki. (TCM aired the dub as well as the original Japanese with English subtitles.) The Disney version was released on DVD on March 7, 2006.

As is the case with Disney's other English dubs of Miyazaki movies, the Disney version of Totoro features a star-heavy cast, including Dakota and Elle Fanning as Satsuki and Mei, Timothy Daly as Mr. Kusakabe, Pat Carroll as Granny, Lea Salonga as Mrs. Kusakabe, and Frank Welker as Totoro and Catbus. The songs for the new dub retained the same translation as the previous dub, but were sung by Sonya Isaacs. 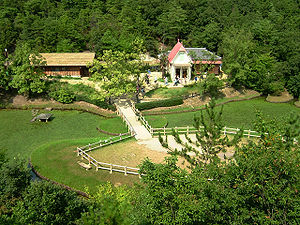 The movie has an 8.1 rating on IMDb,and a 94% approval rating at Rotten Tomatoes.com. Reviews were very positive.