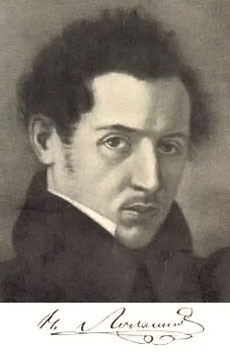 Nikolai Ivanovich Lobachevsky ((Никола́й Ива́нович Лобаче́вский), 1792–1856) was a Russian mathematician. He became known for his achievements in non-euclidean geometry.

Lobachevsky was born in Nizhny Novgorod, Russia. His parents were Ivan Maksimovich Lobachevsky, a clerk in a landsurveying office, and Praskovia Alexandrovna Lobachevskaya. In 1800, his father died and his mother moved to Kazan. In Kazan, Nikolai Ivanovich Lobachevsky attended Kazan Gymnasium. He graduated in 1807 and then went to Kazan University which was founded just three years earlier, in 1804.

In 1832, he married Varvara Alexivna Moisieva. They had seven children.