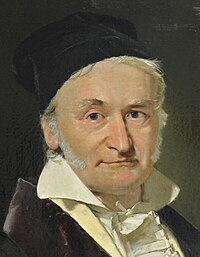 Statue of Gauss in Brunswick

Carl Friedrich Gauss (Gauß) (info • help), Latin: Carolus Fridericus Gauss) (30 April 1777 – 23 February 1855) was a famous mathematician from Göttingen, Germany. Gauss contributed to many areas of learning. Most of his work was about number theory and astronomy.

He was born in Braunschweig. That city was then part of the duchy of Braunschweig-Lüneburg. Today the city is part of Lower Saxony. As a child, he was a prodigy, meaning he was very clever. When he was 3 years old, he told his father that he had incorrectly measured something on his complicated payroll. Gauss was correct. Gauss also taught himself to read.

The Duke of Brunswick gave Gauss a fellowship to the Collegium Carolinum, where he attended from 1792 to 1795. This meant that the Duke paid for the education of Carl Friedrich Gauss at the Collegium. After this, Gauss went to the University of Göttingen, from 1795 to 1798.

When Gauss was 23, scientists spotted the asteroid Ceres but they did not see it for long enough to know its orbit. Gauss made calculations that let them locate it.

Later in life Gauss stopped working on pure math and turned to physics. He did work in electromagnetism and made an early electrical telegraph.