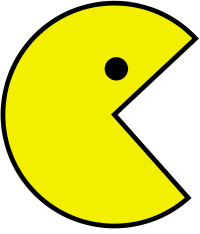 Pac-Man is an arcade video game that was made by Namco and designed by Toru Iwatani. It was released in 1980, and became very popular in the history of games.

In Pac-Man, the player makes a Pac-Man, a yellow disc, move around a maze. The goal is to eat every yellow pellet (circles) while not getting caught by the ghosts/monsters. For extra points, fruits that appear can also be eaten. When Pac-Man eats a big pellet, the ghosts turn blue and can be eaten. Even though the game has 256 stages, the last level can not be finished due to a problem with the creation of the game.

The game is called Puck Man in Japan. The game was named Pac-Man in the United States so that nobody could change the "P" to "F".[1] There were many sequels and remakes based on the game. Hanna-Barbera made a animated TV show airing on ABC in the early 1970s. The game was also part of Namco Museum games. There is a Namco Museum Remix for the Wii.

Pac-Man was one of the first games to have Cutscenes. It has 3 cutscenes in total.[2]