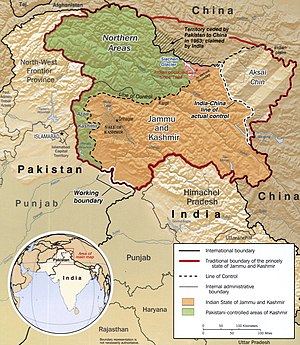 A map of Kashmir; the parts that Pakistan administers are shown in green

Pakistan-administered Kashmir is a territory in Asia. It is the part of the Kashmir region that is governed by Pakistan. The rest of Kashmir is currently split between India and China.

Pakistan-administered Kashmir itself is split into two areas, these are:

Area: of P.A.K. is 86,268 km² (33,308 mi²), excluding the Trans-Karakoram Tract (Shaksgam Valley) of disputed territory, which is also claimed by India. in terms of area Pakistan administered Kashmir is smaller than Moldova but bigger than Belgium

The Pakistan Declaration of 1933 had envisioned the princely state of Jammu and Kashmir as one of the "five Northern units of India" that were to form the new nation of Pakistan, on the basis of its Muslim majority, according to the Pakistanis they had signed a standstill agreement with ruler at the time. The Republic of India has a different perspective on this interpretation. The 2009 edition of the Freedom in the World (report) by the United Nations High Commissioner for Refugees rated Indian-administered Kashmir as partly free,[1] while in comparison Pakistan-administered Kashmir was rated to be not free.[2]

The whole area of Pakistan-administered Kashmir was administered as it was before independence.

Additionally, a part of Hunza-Gilgit called Raskam and the Shaksgam Valley of Baltistan region, ceded by Pakistan to the People's Republic of China in 1963 pending settlement of the dispute over Kashmir. This ceded area is also known as the Trans-Karakoram Tract.

Pakistan administered Kashmir does not include Aksai Chin, the area of the former Princely state of Kashmir and Jammu that is under Chinese control since 1962.The cease-fire line that separates Jammu and Kashmir from the Aksai Chin is known as the Line of Actual Control (LAC).[4]

Elections were held to the 49-seat Legislative Assembly of Pakistan-Administered Kashmir on July 11 to the eighth Legislative Assembly since 1970 (seventh since 1974 when Pakistan granted the region a parliamentary system with adult franchise). "Azad" Kashmir is categorised as an "autonomous" region. But critics claim titles such as Prime Minister and President for the region's elected political leadership are misleading[5] as candidates are required to sign an affidavit of allegiance to Kashmir's accession to Pakistan.[5]

On September 14, 1994, the Supreme Court of Pakistan-administered Kashmir ruled that "the Northern areas are a part of J&K State but are not a part of Azad J&K as defined in the Interim Constitution Act 1974".[6] The Northern Areas presently has no officially named status in Pakistan. Pakistan does not consider this area as a "province" of Pakistan or as a part of "Azad Kashmir". They are ruled directly from Islamabad through a Northern Areas Council. A chief executive (usually a retired Pakistani army officer), appointed by Islamabad is the local administrative head.[7] This area presently has no representatives in both the Azad Kashmir Assembly and in Pakistan’s parliament. Northern Areas’ Legislative Council was created with a membership of 29 (later increased to 32), but its powers are restricted. On May 11, 2007 the NA’s chief executive, who also happens to be the Minister for Kashmir Affairs and Northern Areas Affairs, declared that the region had a right to be represented in the National Assembly. Others demand that it should be given the status of a province. The changes made in 1994 in the local bodies’ ordinance gave more representation to women and delegated some administrative and financial powers to the local administration. However, the people of the region do not enjoy fundamental rights, because it continues to be governed by the Legal Framework Order of 1994.[8] Overall the Supreme Court of Pakistan ruled that Both Azad Kashmir and Gilgit-Baltistan "are a disputed territories and the federal Government of Pakistan has no claim over it".[9]

The Government of Pakistan maintains that the disputed Kashmir region as a whole is the "jugular vein of Pakistan" and a currently disputed territory whose final status must be determined by the will of the people of Kashmir. Pakistan's claims to the disputed region are based on the rejection of Indian fraudulent claims to Kashmir, namely the so-called Instrument of Accession. Pakistanis insists that the Maharaja was not a popular leader, and was regarded as a tyrant by most Kashmiris. Pakistan maintains that the Maharaja used brute force to suppress the population. Pakistan alleges that Indian forces were in Kashmir before the Instrument of Accession was signed with the Dominion of India, and that therefore Indian troops were in Kashmir in violation of the Standstill Agreement, which was designed to maintain the status quo in Kashmir (although India was not signatory to the Agreement, which was signed between Pakistan and the Hindu ruler of Jammu and Kashmir). From 1990 to 1999, some organizations reported that the Indian Armed Forces, its paramilitary groups, and counter-insurgent militias were responsible for the deaths of 4,501 Kashmiri civilians. Similar allegations were also made by some Human rights organizations.

In short, ISLAMABAD holds that: The popular Kashmiri insurgency demonstrates that the Kashmiri people no longer wish to remain within India. Pakistan suggests that this means that Kashmir either wants to be with Pakistan or independent.

According to the Two-nation theory, which is one of the theories that is cited for the partition that created India and Pakistan, Kashmir should have been with Pakistan, because it has a Muslim majority. India has shown disregard to the resolutions of the UN Security Council and the United Nations Commission in India and Pakistan by failing to hold a plebiscite to determine the future allegiance of the state.

The Chenab formula was a compromise proposed in the 1960s by Australia, in which the Kashmir Valley and other Muslim-dominated areas north of the Chenab River would go to Pakistan, and Jammu region and other Hindu-dominated areas would remain within the Republic of India, Ladakh would have probably have gone to India as well with some areas adjoining to be merged with Tibet. It was outright rejected by all the parties involved and therefore never materialised.