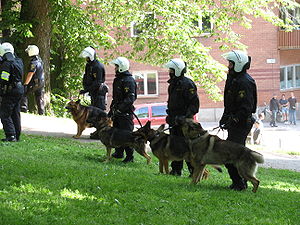 Swedish police dogs during nationalist demonstrations on National Day in 2007

Police dog being trained to attack

A police dog (also called a K-9) is a dog trained to help police and other law enforcement people. German Shepherds are the most common breed, but other breeds are also used. If a police dog is killed in duty, it is usually given a full police funeral.[1] K-9s are often given their own ballistic vests, and some are given their own police IDs and badges.[2]

What can police dogs do?

A police dog may be trained to do one special thing, or a few different things. Common K-9 jobs include:[3]

There are also specialized police dogs, who are used only for a specific job because they have special skills or training for that job. For example: 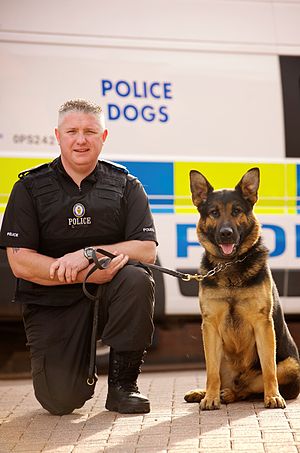 Different breeds of police dogs tend to be good at different things. However, any good police dog should be intelligent, aggressive, strong, and have a good sense of smell. Many police dogs are male and unneutered (because neutering can make a dog less aggressive). However, there are female police dogs, which are used for rescue, tracking, and locating bombs and drugs.[8] German Shepherd Dogs and Belgian Malinois are the most commonly used; however, other dog breeds (and their specialties) include:[8]