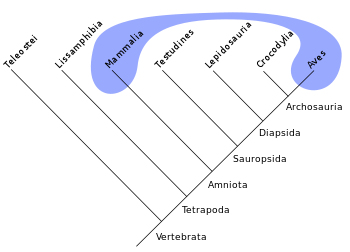 The group of "warm-blooded animals" is polyphyletic. 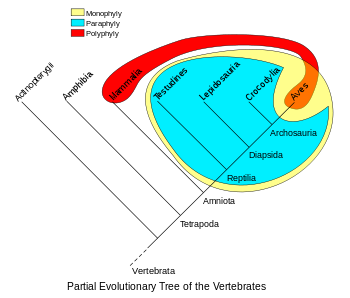 Comparison of phylogenetic groups, showing a monophyly (sauropsids), a paraphyly (reptiles), and a polyphyly (warm-blooded animals)

Polyphyly is a term in cladistics.[1] It describes a group of organisms whose last common ancestor is not a member of the group. Another way of expressing this is to say that polyphyly includes groups some members of which are descended from ancestral populations.[2][3]

The diagrams show that birds and mammals are indeed related, but only at the level of the early amniotes. In terms of evolution, there is a vast gulf between them.

More common in traditional taxonomy is to include all descendants (say, living mammals) without the group they evolved from (which would be some clade in the therapsida). This is done for convenience; but it makes the mammals polyphyletic.

Biological classification aims to group species together such that every group is descended from a single common ancestor. A polyphyletic group can be "fixed" either by excluding clades or by adding the common ancestor.

According to cladistics it should be the aim of classification to ensure that all groups are monophyletic. However, other taxonomists argue that there is a valid place for groups that are paraphyletic. These would contain their most recent common ancestor but not all the descendants of that ancestor.