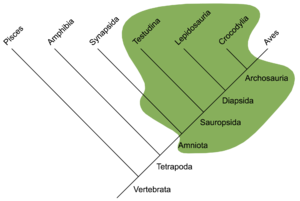 Diagram of traditional Reptilia: it is not a clade. To be a clade it would need to include birds (Aves) and drop Amniota. This is why the term 'Sauropsida' is often preferred to the term 'Reptilia' (in modern taxonomy).

Reptile is the common name for one of the main groups of land vertebrates. It is not used so much by biologists, who use more accurate terms.

The name "reptile" comes from Latin and means "one who creeps". All living reptile species are cold blooded, have scaly skin, and lay cleidoic eggs.[1][2] They excrete uric acid (instead of urea), and have a cloaca. A cloaca is a shared opening for the anus, urinary tract and reproductive ducts. Reptiles also share an arrangement of the heart and major blood vessels which is different from that of mammals.[3]

Many important groups of reptiles are now extinct. The great marine reptiles of the Mesozoic era, the ichthyosaurs, plesiosaurs and mosasaurs, are extinct. We used to say the dinosaurs were extinct, but they survive in the form of their feathered descendents (birds). Ancient reptiles that do survive include the turtles, the crocodiles and the Tuatara, the lone survivor of its group. The great majority of present-day reptiles are snakes and lizards.

The study of living reptiles is called herpetology.

Birds in relation to reptiles

Reptilia is an evolutionary grade rather than a clade. The main reason is that the term 'reptile' does not include birds, the descendents of theropod dinosaurs. Another reason is that the word 'reptile' is misleading because many extinct types were very different from living reptiles.

So instead of Reptilia as a taxonomic class, today most experts use Class Sauropsida (which includes all reptiles and birds, living and extinct). Class Synapsida includes mammals and all their forebears. Reptile is still the usual informal term to describe living snakes and lizards. Mammals are a genuine clade, and so Mammalia is still the taxonomic term.

Since reptiles are not monophyletic, reclassifying them is one of the key aims of researchers.[4][7][8] Some taxonomists, such as Benton,[9] make Sauropsida and Synapsida as class-level taxa. The two groups split in the Carboniferous, from stem-group Amniotes (the early tetrapods, which laid cleidoic eggs).