Chameleons are a family of lizards. Most can change the colo(u)r of their skins for camouflage, or to signal mood to other chameleons.

They are a distinct clade of lizards. They have parrot-like zygodactylous feet,[1] separately mobile and stereoscopic eyes,[2] very long tongues they can flick out, a swaying gait,[3] their prehensile tail,[4] crests or horns on their strange-shaped heads, and many can change colour.

There are about 160 species, living in Africa, Madagascar, Spain and Portugal, across south Asia, Sri Lanka. They have been introduced to Hawaii, California and Florida, and are found in warm habitats that vary from rain forest to desert conditions. Chameleons are often kept as household pets.

Chameleons have long sticky tongues that they can fire out in a fraction of a second. They stretch up to twice their body size. Their eyes can move independently. The largest species is about 1.5 feet when fully grown. They are mainly insectivores, but they do take occasional smaller lizards.

The world's tiniest chameleon has been found on Madagascar. At 2.9 cm, it is one of the world's smallest lizards.[5]

Genetic analysis proved there are four different species of this tiny animal.[6]

Independent eye movement of the chameleon
Some scientists say that the vision of the chameleon is the most unusual of this planet. Chameleons have 360-degree eye-turning,[7] the ability to zoom in and out, and binocular vision. 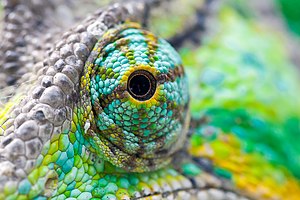 Each of the chameleon's eyes can move separately,[8] allowing them to see all around them at all times.

Chameleons have two eyes which overlap.[9] This gives them 3D vision. This is especially helpful when they can switch with monocular vision, which is seeing with each eye independently.[10] This allows them to have a more detailed vision.