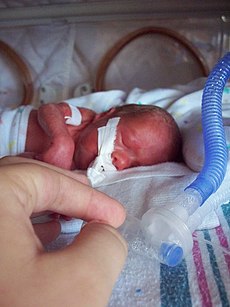 Premature baby in an incubator

Premature birth is when a baby is born before the normal end of pregnancy. In humans, a pregnancy normally lasts for about nine months. On average, a pregnancy lasts for 266 days.

Babies who are born before 37 complete weeks of pregnancy (calculated from the last menstrual period) are said to be premature. In the United States, about twelve percent of the babies are born prematurely, that is about one in eight.[1] In 2003, there were over 490,000 such births. Worldwide rates of prematurity are more difficult to get. In developing regions there is often no professional medical care for these babies. This makes it difficult to tell how far along the pregnancy really was. For this reason, the World Health Organization tracks rates of low birth weight instead. In 2000, this occurred in 16.5 percent of births in less developed regions.[2] It is estimated that one-third of these low birth weight deliveries are due to premature delivery.

The risk of having a problem (called a complication) is higher in shorter pregnancies. Babies born prematurely die more often in their first year of life than others. Most such deaths occur in the first month of life, which is called neonatal mortality.

Worldwide, prematurity accounts for ten percent of neonatal mortality, or around 500,000 deaths per year.[3] In the U.S., where many infections and other causes of neonatal death have been markedly reduced, prematurity is the leading cause of neonatal mortality at 25%.[4] Prematurely born infants are also at greater risk of developing serious health problems such as cerebral palsy, chronic lung disease, gastrointestinal problems, mental retardation, vision or hearing loss[5] and are more susceptible to developing depression as teenagers.[6]

Nearly half of all premature births have no known cause. When conditions permit doctors may attempt to stop premature labor, so that the pregnancy can have a chance to continue to full term. This will increase the baby's chances of health and survival. In fact, the rate of preterm births in the United States has increased 30% in the past two decades.[7]

In developed countries, many hospitals have special facilities for prematurely born infants. A hospital unit of this type is usually known as a neonatal intensive care unit (NICU). In the NICU, premature babies are kept under radiant warmers or in incubators. They are enclosed in plastic with climate control equipment which keeps them warm and keeps germs away from them. Modern neonatal intensive care involves sophisticated measurement of temperature, respiration, heart function, oxygen supply, and brain activity. Treatments may include fluids and nutrition through intravenous catheters, oxygen supplementation, breathing support, and medications.

In developing countries where advanced equipment may not be available or reliable, simple measures such as kangaroo care (skin to skin warming), encouraging breastfeeding, and basic infection control measures help reduce death rate and illness.

The earliest time in the pregnancy where the infant has at least a 50% chance of survival is called the limit of viability. In countries with good health care, viability has been reduced to about 24 weeks.[8][9] Rare survivors have been documented as early as 21 weeks,[10] but this date is controversial because the pregnancy was measured from the date of conception rather than the date of her mother's last menstrual period. This makes gestation appear 2 weeks less than if calculated by the more common method.[11] Risk of brain damage and developmental delay is significant at that early time. Even if the infant survives, there are ethical controversies over the care given to such infants. The limit of viability has also become a factor in the abortion debate.