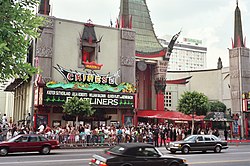 A movie release (or premiere) is when a completed movie is released for the public to see. It may be in theaters or for home viewing. A movie's release date can affect how much money the movie makes.

A movie's release date and how it is released is a part of the marketing of the movie.[1] Often a movie will be tested on selected audiences to see how they like it.[1] This is called a limited release. A movie might also be shown first at a film festival to see how it does. If an audience does not like something, the moviemakers can make changes before it is released to the public.[1]

There were traditional times of the year for releases of certain types of movies. Summer was the traditional time to release blockbuster movies.[4] These are large budget movies with a great deal of publicity. Spring was the usual time for art films.[4] Another major time of the year to release major movies is Christmas.[4] Lately, however, the movie calendar has become very crowded with more new releases. This means that blockbuster movies now come out all during the year.[4]

A print is a copy of the physical film itself. Each movie theater needs a print for showing.[5] This becomes expensive and along with advertising they are called 'P&A'.[5] Advertising can include parties for the stars of the movie.[5] It can also mean arranging interviews on talk shows and placing movie clips on video sharing websites like YouTube.[5] This is to get people talking about the movie. The period of time for advertising a movie only a few weeks before it is released. After that time it is hoped word of mouth will advertise the movie.[5]

The movie Four Weddings and a Funeral was released in the United States in 1994.[6] The distributor, Polygram, had a limited P&A budget.[6] They released the movie on a limited basis, in New York and Los Angeles. They spent heavily on advertising in these cities hoping the limited release would be a success.[6] In this case it was and they used the profits to gradually release the movie all over the country.[6] This is called a 'platform release'. It allows smaller movie studios to compete with the large P&A budgets of the big studios.[6]