Coat of arms of the Principality of Orange.

Prince of Orange is a title of nobility.

The history of the title 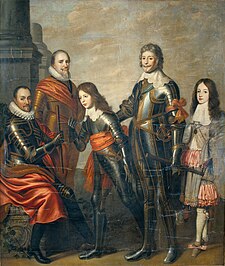 William III died without legitimate children. This meant that the principality was seen as inherited by his closest cognate relative on the basis of the testament of Frederic-Henry, Frederick I of Prussia[source?]. He handed over the principality's lands but not the title to France in 1713. France supported his claim. In this way, the territory of the principality was no longer a separate state, but became a part of France. Through the Treaty of Utrecht. A new "Principality of Orange" was created by the King of Prussia as part of the duchy of Gelderland.[source?]. The kings of Prussia and the German emperors styled themselves Princes of Orange till 1918.

John William Friso of Nassau was chosen as the heir to the princes of Orange in the Netherlands by the last will of William III. John William Friso was also related to William the Silent through the female line. Several of his descendants became stadtholders. They claim the principality of Orange on the basis of agnatic inheritance (inheritance of lands to the brother rather than the sons of the king)[source?]. This way of inheriting is similar to the way William the Silent inherited from his cousin René. The claim to the title is also on basis of the testament of Philips William, Maurice and William III. Although they claimed the title "Prince of Orange", France never allowed them to obtain anything of the lands of the principality itself. It is from this tradition that later stadtholders of the Netherlands, and the present-day royal family of the Netherlands, also hold the title.

People with title Prince of Orange

As sovereign prince of Orange

Until 1340, it was customary for all sons of the prince of Orange to inherit the title. Only the direct line of descent to Raimond V is shown here.

House of Châlon-Arlay (also House of Ivrea of Anscarid dynasty)

As a personal title or as heir apparent

As personal title of nobility:

As royal title for the heir apparent: