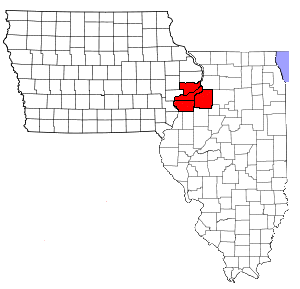 The Mississippi River between Davenport and Rock Island

The manufacturing, or making, of goods is a big part of the economy in the Quad Cities. Military equipment, such as weapons and armor, are made at the Rock Island Arsenal. John Deere & Company, which makes farm equipment, is in Moline.[4]