Map of Massachusetts. Norfolk County, the county that Quincy is in, is pink. Quincy is red 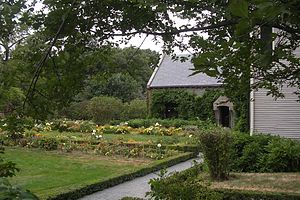 Quincy is a city in Norfolk County in the U.S. State of Massachusetts. It is part of Metropolitan Boston. It is named after Colonel John Quincy, who was Abigail Adams' mother's father. Quincy also had Adams' son, John Quincy Adams, named after him. It is the birthplace of John Adams, the second U.S. President, and Adams' son, John Quincy Adams, the sixth U.S. President. It was settled in 1625 and officially founded in 1792.