Abigail Smith Adams (November 11, 1744–October 28, 1818) was the wife of John Adams, the second President of the United States. Later on, people started to address the wife of the president as the First Lady. So, she became the second First Lady of the United States.[1] She was born in Weymouth, Massachusetts. She belonged to a famous family of Massachusetts (the Quincy Family).

Abigail Adams advocated for an equal education in public schools for boys and girls. In her earliest years, she was often in poor health. She spent most of her time reading. In addition to that, she corresponded to family and friends before getting married. [2]

Adams did not get any formal education in any school or college. Her father had a big library, so she studied many books and became smart that way. She married John Adams in 1764. In the next ten years, she had five children (a sixth was stillborn). One of her children was John Quincy Adams, the sixth President of the United States.

Adams was a vital confidant and adviser to her husband John Adams. She opposed slavery and supported women's rights. In 1776, her husband participated in the First Continental Congress in Philadelphia. There, Adams wrote her most famous letter to the Founding Fathers "remember the ladies."[3]

In 1784, Adams joined at her husband at his diplomatic post in Paris. She became interested in the manners of the French. After 1785, she filled the difficult role of wife of the First US Minister to Great Britain. She did so with dignity.[4] 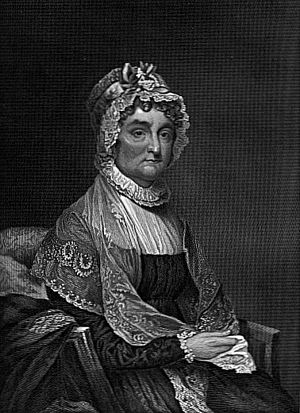