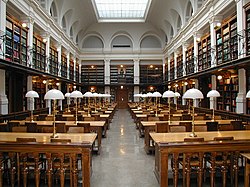 A library is a place where many books are kept. Most libraries are public and let people take the books to use in their home. Most libraries let people borrow books for several weeks. Some belong to institutions, for example, companies, churches, schools, and universities. Also a person's bookshelves at home can have many books and be a library. The people who work in libraries are librarians. Librarians are people who take care of the library.

Other libraries keep famous or rare books. There are a few "Copyright libraries" which have a copy of every book which has been written in that country. Some libraries also have other things that people might like, such as magazines, music on CDs, or computers where people can use the Internet. In school they offer software to learn the alphabet and other details.

The Eötvös Loránd University Library in Budapest
With the spread of literacy, libraries have become essential tools for learning. Libraries are very important for the progress and development of a society.Libraries are collections of books and other informational materials. People come to libraries for reading, study or reference. Libraries contain a variety of materials. They contain printed materials, films, sound and video recordings, maps, photographs, computer software, online databases, and other media.

A library is not a bookstore (a store that sells books).

Importance of a Library

The prime purpose of a library is to provide access to knowledge and information. To fulfil this mission, libraries preserve a valuable record of culture. Then they pass down this to the coming generations. Therefore, they are an essential link between the past, present and future.

Libraries help the students to develop good reading and study habits. Public officials use libraries for research and public issues. The libraries provide information and services that are essential for learning and progress. 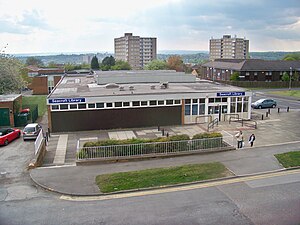 A small public library in the Seacroft area of Leeds.

Many places have a public library, where anybody can join if they live in the area. With a library card, people can borrow books and take them home for several weeks. It does not cost money to get a library card at most public libraries.

Books are kept on shelves in a special order so they are easy to find. Public libraries have lot of books on various topics including story books and many others. Many public libraries have books and CDs about learning English. Stories are kept in alphabetical order by the last name of the person who wrote them, the author. Books about other things are often given a special number, that refers to what they are about. They are then put on the shelf in number order. One number system used by many libraries is the Dewey decimal system.

Special libraries are those libraries that are not public libraries or academic libraries. They are usually small. Many times a special library holds books on a particular subject or even a special kind of book. Some special libraries keep just old books or books by Shakespeare. A special library can be owned by a business for use only by that business. For example, Disney World in Orlando has its own library that is not open to the public but for the use of the people who work for the company.

The earliest known library was discovered in Iraq and belonged to the ancient civilization in Sumer. They didn't use paper books but instead wrote everything on clay tablets using a style of writing called cuneiform. These tablets are over 5,000 years old. The Library of Alexandria, in Egypt, was the largest and most important library of the ancient world. It was destroyed when the Romans conquered Egypt in 30 BC. Rome’s first public library was established by Asinius Pollio who was a lieutenant of Julius Caesar. Eventually Rome would build 28 public libraries within the city. When the Roman Empire fell in 330 AD, many books went east to the city of Byzantium where a large library was built. Other libraries were built in monasteries and public homes.

Libraries began to appear in many Islamic cities, where science and philosophy survived after the fall of the Roman Empire. Christian monks and Islamic libraries exchanged books to copy.