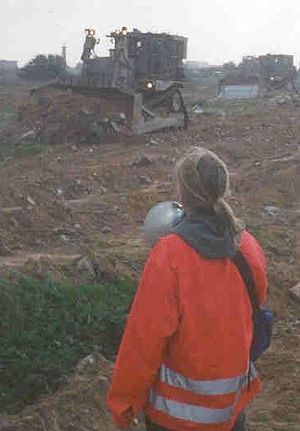 Rachel Aliene Corrie (10 April 1979 – 16 March 2003) was an American human rights activist, peace activist and a member of the International Solidarity Movement (ISM), who was crushed to death by an armored bulldozer belonging to the Israel Defense Forces, while she was protesting against the destruction of Palestinian homes in Gaza.[1] The eyewitnesses said that the Israeli soldier operating the bulldozer on purpose ran over Corrie, and the Israeli government claims it was an accident.[1][2][3]

Her life has been the focus of several tributes, including the play My Name Is Rachel Corrie, the cantata The Skies are Weeping and more than 30 songs. Her collected writings were published in 2008 under the title Let Me Stand Alone, opening "a window on the maturation of a young woman seeking to make the world a better place."[4] The Rachel Corrie Foundation for Peace and Justice has been established to continue her work.

She has been compared to Anne Frank.[5]