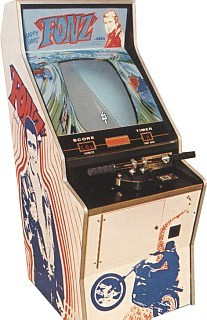 Fonz is an example of a racing game.

A racing game is a video game genre which involves competing in races. The object of the game is to be the first racer to compete in a arena in the shortest time. They may be based on anything from real-world racing leagues to entirely fantastical settings, and feature any type of land, air, or sea vehicles.