Revolutions of 1848 in the German states

Cheering revolutionaries after fighting in March 1848

These revolutions had as example the French Revolution of 1848 in February 1848, when King Phillipe of France abdicated the throne.

The biggest successes of the German revolutions happened in March in Berlin and Vienna. The result was the election of a German National Assembly in Frankfurt am Main. 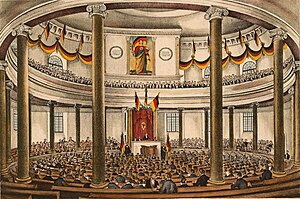 But it was in Berlin too where the Prussian king Frederick William refused to become emperor of a united German state. Austria and Prussia withdrew their delegates from the Assembly, and the Assembly itself slowly disintegrated afterwards.