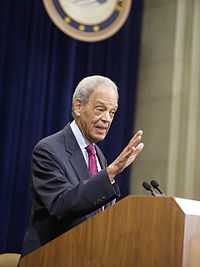 Roger Wilkins (March 25, 1932 – March 26, 2017) was an African-American civil rights leader, professor of history, and journalist. He was a journalist for The Crisis and for a short time wrote for The Washington Post. Between 1966 and 1969, Wilkins served as the United States Assistant Attorney General during the Lyndon B. Johnson presidency. He was a member of the Democratic Party. He was a history professor at George Mason University.

In the 1990s, Wilkins was an anti-apartheid activist and strong supporter of Nelson Mandela. He protested many times for Mandela's release in South Africa during that time period.

Wilkins was a political writer and was known for writing Jefferson's Pillow: The Founding Fathers and the Dilemma of Black Patriotism (2001).

Wilkins was born in Kansas City, Missouri. He was raised in Grand Rapids, Michigan. He studied at the University of Michigan. He was married to Patricia King until his death. They lived in Washington, D.C..

Wilkins died on March 26, 2017 in Kensington, Maryland from complications of dementia, aged 85.[1]