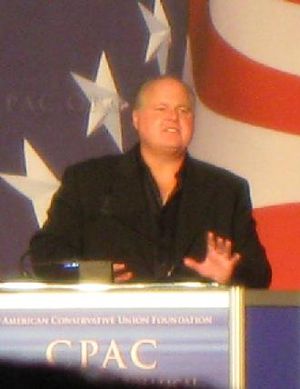 Rush Hudson Limbaugh III (/ˈlɪmbɔː/, LIM-baw; January 12, 1951 – February 17, 2021) was an American conservative radio talk show host and writer. He was the host of The Rush Limbaugh show where callers could call in and express their opinions.

Leftist critic Media Matters said some of his views were sexist.[2][3] The 2015 documentary The Brainwashing Of My Dad discusses how his program could radicalize people into sharing such views.[4]

He was one of the most highly paid people in the US media.Template:How much

President Donald Trump awarded him the Presidential Medal of Freedom in February 2020 during the State of the Union Address.[5]

Limbaugh was diagnosed with advanced lung cancer in January 2020.[7] Nine months later in October, he said that his cancer was terminal.[8] Limbaugh died from problems caused by the disease in Palm Beach, Florida on February 17, 2021, a month after his 70th birthday.[9]