São Tomé is the capital city of São Tomé and Príncipe. It is the largest city in the country. The city has a population of 56,166 people. Its name is Portuguese for "Saint Thomas." São Tomé is important as a port. It is located on Ana Chaves Bay in the north east of São Tomé Island. 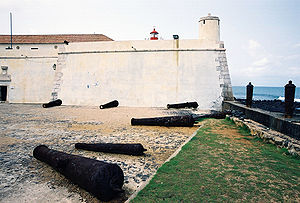 The city was founded by Portugal in 1485. It is centred on a sixteenth century cathedral. Another early building is Fort São Sebastião. It was built in 1575 and is now the São Tomé National Museum. In 1599, the city as well as the islands were captured by the Dutch for two days and again in 1641 for a year. São Tomé was the colony's capital until 1753. It has been the national capital since 1852.

São Tomé is known for its role in the forced conversion of Jews during the Inquisition. When King Manuel I of Portugal wanted to force the Jews to convert, he took away their children and had them sent to this remote island.

Features of the town include the Presidential Palace, the Fisherman's Church, and a cinema. The city is also home to two markets, a radio station, a hospital, and an international airport. São Tomé also serves as the center of the island's road and bus networks.