Schönbrunn Palace is a former imperial 1,441-room Rococo summer residence in Vienna, Austria. It is one of the most important cultural monuments in the country. Since the 1960s it has been one of the major tourist attractions in Vienna. The palace and gardens show the tastes and interests of Habsburg monarchs.[1] 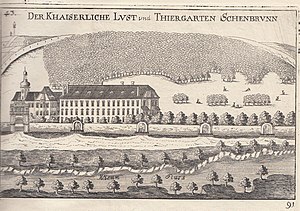 Katterburg and Gonzaga's palace near Wien river in 1672. In the background the hill of later Gloriette.

Schönbrunn from the front side, painted by Canaletto in 1758

In the year 1569, Holy Roman Emperor Maximilian II purchased a large floodplain of the Wien river. It was between Meidling and Hietzing. The emperor had the area to be fenced and put game there such as pheasants, ducks, deer and boar. This was the court's recreational hunting ground. In a small separate part of the area, "exotic" birds such as turkeys and peafowl were kept. Fishponds were built, too.

The name Schönbrunn (meaning "beautiful spring") is from an artesian well from which water was consumed by the court.

During the next century, the area was used as a hunting and recreation ground. Eleonora Gonzaga, who loved hunting, spent much time there. She was given the area as her widow's residence after the death of her husband, Ferdinand II. From 1638 to 1643, she added a palace to the Katterburg mansion. In 1642 it was called "Schönbrunn" for the first time. The start of the Schönbrunn orangery seem to go back to Eleonora Gonzaga as well.

View of the Great Parterre on to the Gloriette.

View of the gardens.

The sculpted garden space between the palace and the Sun Fountain is called the Great Parterre. The French garden, a big part of the area, was planned by Jean Trehet in 1695. It has a maze.

Western parts were turned into English garden style in 1828–1852. At the outmost western edge, a botanical garden was made in 1828.

Lining the Great Parterre are 32 sculptures, which represent deities and virtues. 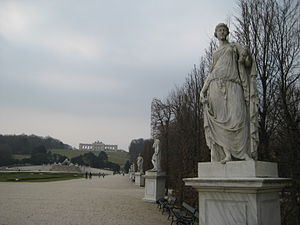 After the end of the monarchy in 1918, the new Austrian Republic became the owner of Schönbrunn Palace. They made it a museum.

Later it was used for important events such as the meeting between John F. Kennedy and Nikita Khrushchev in 1961.

UNESCO catalogued Schönbrunn Palace on the World Heritage List in 1996, together with its gardens, as a remarkable Baroque ensemble and example of synthesis of the arts.

Media related to Palace and gardens of Schönbrunn at Wikimedia Commons