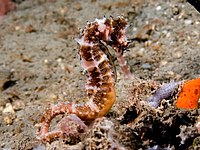 Seahorses, genus Hippocampus, are a type of teleost fish. They are called 'seahorses' because their head looks like that of a horse. There are about 32–48 species of seahorse. They live in tropical oceans.

Seahorses are unique because the male hatches the eggs in a pouch on his belly.[1] The female inserts her ovipositor into the male’s brood pouch and deposits dozens to thousands of eggs. As the female releases her eggs, her body slims while his swells. The fertilised eggs are then embedded in the pouch wall.[1] They get nutrition and oxygen from the fluid in the pouch. In the pouch, the salinity of the water is regulated; this prepares the newborns for life in the sea.[1]

Both animals then sink back into the seagrass and she swims away. The eggs then hatch [2][3]

Throughout gestation, which in most species requires two to four weeks, his mate visits him daily for 'morning greetings'. They interact for about 6 minutes. The female then swims away until the next morning, and the male vacuums up food through his snout.[2]

Research published in 2007 shoes that the males release into the surrounding sea water during fertilization, and not directly into the pouch as previously thought.[4]

The number of young released by the male seahorse averages 100-200 for most species, but may be as low as 5 for the smaller species, or as high as 1,500.

When the fry are ready to be born, the male expels them with muscular contractions. He gives birth at night and is ready for the next batch of eggs by morning when his mate returns.

Like almost all other fish species, seahorses do not nurture their young after birth. Infants are susceptible to predators or ocean currents which wash them away from feeding grounds or into temperatures too extreme for their delicate bodies. Fewer than 0.5% of infants survive to adulthood, explaining why litters are so large. These survival rates are actually fairly high compared to other fish, because of their protected gestation. This makes the process worth the cost to the father. The eggs of most other fish are abandoned immediately after fertilization.[3]

Seahorses are the only fish that experience true male pregnancy.[3]