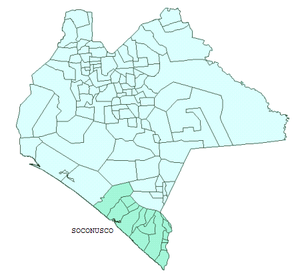 Soconusco is a region of the Mexican state of Chiapas. It is in the most southern part of the state. It borders the Republic of Guatemala on the southeast, the regions Costa, Sierra and Fraylesca of Chiapas on the east and north, and the shore of the Pacific Ocean on the southwest. It is a region of rich lowlands and foothills. The economic center of Soconusco is Tapachula.

The name comes from the Nahuatl word xoconostle, meaning the fruit of the prickly pear cactus. It was, under the Mexican culture, the farthest region of trade. The area provided jaguar pelts, cacao, and quetzal feathers for the ruling classes in the Aztec capital of Tenochtitlan.

The Soconusco region is the main coffee-producing region in Chiapas. It has many plantations farther inland in the foothills of the Sierra Madre del Sur.