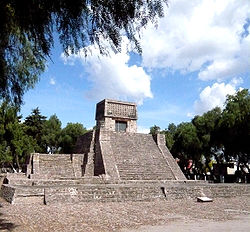 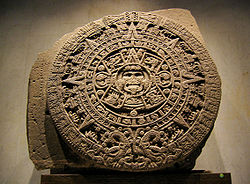 The Aztec Sun Stone, also known as the Aztec Calendar Stone, at the National Museum of Anthropology, Mexico City

The Aztecs were Native American people who lived in Mesoamerica. They ruled the Aztec Empire from the 14th century to the 16th century.[1]

The name "Aztec" comes from the phrase "people from Aztlan". Legends say that Aztlan was the first place the Aztecs ever lived. "Aztlan" means "place of the herons" in the Nahuatl language.[2]p. 8

Often the term "Aztec" refers just to the people of Tenochtitlan. This was a city on an island in Lake Texcoco. These people called themselves the Mexica which is why the country is called Mexico, or the Nahua which is why their language is called Nahuatl.[3]

Before the Aztec Empire conquered them, the indigenous (native) people lived in many separate city-states. These were small cities with farmland around them. Each state had its own ruler. Around 1100 AD, these city-states started to fight each other for power and control of the area's resources.[4]

Historians think the Aztecs came to central Mesoamerica around 1200.[5] They came from what is now northwest Mexico. According to historian Lisa Marty:

By 1325, the Aztecs had built Tenochtitlan on an island in Lake Texcoco. Tenochtitlan became a city-state that gradually became more and more powerful.[6]

By about 1400, three city-states had grown into small empires. In 1428, these two empires fought the Tepanec War for control of the area. The Texcoco empire made an alliance with some other powerful city-states, including Tenochtitlan, and won the war. These allies were supposed to share power equally as they started to gain control of more land. However, by 1430, Tenochtitlan became the most powerful member of the alliance. It became the capital city of the Aztec Empire, and its ruler became the 'high king' of the Empire.[7] 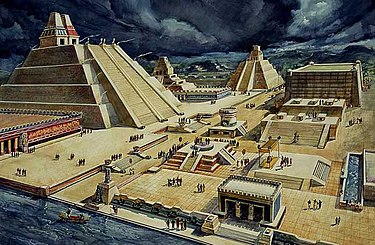 Drawing of what part of Tenochtitlan may have looked like
Main page: Aztec Empire

Tenochtitlan was the capital city of the Aztec Empire. Tenochtitlan was one of the greatest cities of the world in that time. By the early 1500s, at least 200,000 people lived in the city. This made Tenochtitlan the largest city in the Americas before Christopher Columbus arrived.[9]

Mexico City now covers the whole area where Tenochtitlan used to be.[10]

The Aztecs believed in many gods. Two of the most important gods they worshipped were Huitzilopochtli, the god of war and the sun, and Tlaloc, the rain god.[11] Another important god was Quetzalcoatl (feathered snake), the god of learning and civilization.[12]

The Aztecs ate plants and vegetables that could grow easily in Mesoamerica. The main foods in the Aztec diet were maize, beans, and squash. They often used tomatoes and chili as spices.[15] Aztec markets sold fruit, vegetables, spices, flowers, dogs, birds, and cocoa beans. They also created chocolate. However, they did not have sugar, so their chocolate was a strong liquid with chili in it.[16] They also made an alcoholic drink called chocolatl.[17] These foods later spread around the world.[16]

Next were nobles. These were the Empire's powerful members of the government; great warriors; judges; and priests.[8] These people enjoyed a high social status.[20]

The next social class was the commoners (common people). These were the Empire's everyday workers. Most of them farmed, ran stores, or traded. Other workers included artisans, regular soldiers, and fishers. Commoners were allowed to own land as a group or a family. However, a single person was not allowed to own land.[20]

The lowest social classes in Aztec society were serfs and then slaves. Slaves had no rights at all. They were bought and sold at Aztec markets.[9] The Aztecs also sacrificed some prisoners of war to their gods.[21] However, if they had the money, they could buy their own freedom and become commoners.[20]

For most of the Aztec Empire's existence, it was very difficult to move between social classes. Usually, if a person was born in a social class, they would stay in that class for the rest of their life.[8]

Aztecs had harsh punishments for crimes that seem simple to us now. For example, a person could get the death penalty for adultery; cutting down a living tree; moving the boundary of a field to make their land bigger and someone else's smaller; major theft; treason; disorderly conduct (causing trouble in public), drunkenness; and promiscuity. Under Aztec sumptuary law, a commoner could also get the death penalty for wearing cotton.[2][20]p. 88

The most popular Aztec sport was Tlachtili. They played this game using rubber balls and vertical hoops on opposite walls in the middle of the court. The game's goal was to shoot the ball into the hoop using their knees. The first team to score won the game.[25]

End of the Aztec Empire

Between 1519 and 1521, the Spanish conquistador, Hernán Cortés, allied with Tlaxcala and other enemies of the Aztecs. The conquistadors defeated the Aztecs, took their empire, and made it into a Spanish colony. Some Aztecs did not want to fight against the soldiers of Cortés, because they thought they were gods.[26]

Today many Mexicans have Aztec and other Native American forefathers. People still use Aztec symbols in Mexico. On the Mexican flag, there is a picture of an eagle on a cactus with a snake in its mouth. This was an Aztec symbol.[27] Even the name Mexico is an Aztec word.[28]