Stanley "Tookie" Williams III (December 29, 1953 – December 13, 2005) was an American murderer and co-founder of a street gang, the Crips.[1] He was born in New Orleans, Louisiana. In 1959, he moved to Los Angeles, California, where in 1970 he stole a car, for which he was convicted and sent to juvenile hall. He and Raymond Washington (1953–1979) founded street gang the Crips in 1971 in Los Angeles.[1] Williams shot four people dead in Los Angeles in 1979 during robberies he committed.[1] The events were caught on film by surveillance cameras. Later that year he was convicted of four counts of first degree murder and two counts of robbery. He was sentenced to death and was executed by lethal injection at San Quentin State Prison, California.[1] 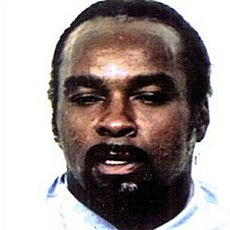