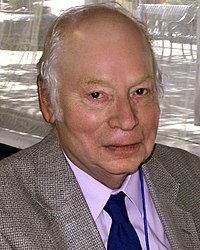 Steven Weinberg (/ˈwaɪnbɜrɡ/; May 3, 1933 – July 23, 2021) was an American theoretical physicist. He won the 1979 Nobel Prize in Physics for his works with Abdus Salam and Sheldon Glashow to the unification of the weak force and electromagnetic interactions.

Weinberg was born in New York City. He studied at Cornell University and Princeton University.[1] In 1954, he married law academic Louise Goldwasser. They have one daughter, Elizabeth. Weinberg is Jewish[2] and a liberal.[3]