The front of the Teatro di San Carlo

The new King of Naples, Charles VII, was very interested in the arts. He wanted the city to have a new and beautiful opera house. The old one, the Teatro San Bartolomeo, was falling apart. King Charles paid for building the new theatre. It was built on land next to his palace and designed by Giovanni Antonio Medrano (1703 – 1760). The new theatre took only seven months to build. It opened on 4 March 1737. The first opera performed there was Achille in Sciro (Achilles in Skyros). The famous Italian poet, Metastasio, wrote the words and story. Domenico Sarro wrote the music. He also conducted the orchestra. 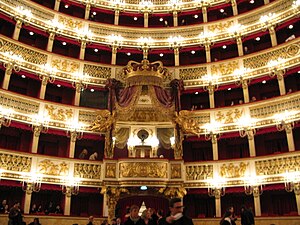 The box seats inside the Teatro di San Carlo. The box in the centre with a large crown on top was the king's box

The building burnt down on 12 February 1816. Six days after the fire, King Ferdinand IV (the son of King Charles) asked the architect Antonio Niccolini to build the theatre again. Nicolini used Medrano's designs but he made the stage bigger. The inside of the new Teatro di San Carlo was even more beautiful than the first one. The new theatre opened on 12 January 1817, with an opera by Simon Mayr, Il sogno di Partenope (Partenope's Dream). Since then, only small changes were made to the building. It was damaged by bombs during World War II, but American and British soldiers soon repaired it.

Like most Italian opera houses, the Teatro di San Carlo is built in a horseshoe shape. It has downstairs seats called stalls. There are six more levels of seats called box seats where groups of people can sit together. The box seats go all the way to the top of the opera house. Overall, there are 1386 seats[1] in the Teatro di San Carlo today. The inside of the theatre has beautiful decorations in red and gold. A large painting by Giuseppe Cammarano covers the ceiling. The painting shows the Greek god Apollo and the goddess Minerva. All around them are famous poets.

Because of its shape, the San Carlo has very good sound quality. People can hear the singers and orchestra even in the most far away seats. Operas, ballets and concerts are performed there. People can also rent the theatre for parties or to put on their own shows. In 2010, much work was done on the opera house. It now has more rooms for rehearsals, modern machinery for the stage, and air conditioning. The Teatro di San Carlo has its own orchestra.