The Clean Tech Revolution: The Next Big Growth and Investment Opportunity, is a 2007 book by Ron Pernick and Clint Wilder. They say that using clean technologies is a profitable enterprise that is moving steadily into mainstream business. Clean technologies are seen to be important for economic growth.[1] 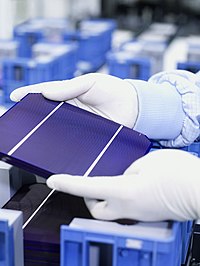 Pernick and Wilder say that, in the 1970s, clean technology was considered “alternative”. Even at the start of the 21st century, the term clean tech was not yet widely used. But now, throughout much of the world, in trends large and small, there is "the beginning of a revolution that is changing the places where we live and work, the products we manufacture and purchase, and the development plans of cities, regional governments, and nations around the globe."[3]

The book also explains that nuclear power and clean coal are not clean technologies. Apart from the risks associated with nuclear power, "multibillion-dollar nuclear plants are simply not cost-effective when compared with other energy sources."[5] The authors also believe that clean coal is an oxymoron for a myriad of reasons, including the sheer number of coal mine-related deaths and the fact that coal-fired plants, even some cleaner ones, are major contributors to serious illnesses such as asthma, heart disease, and mercury poisoning.[6]

Emerging clean tech cities are seen to include Copenhagen, where wind power generates 20 percent of Denmark's electricity, and Chicago, a leader in "green" buildings saving energy, heating and cooling costs.[2]

Pernick and Wilder identify six major forces, which they call the six C’s, that are pushing clean technology into the mainstream and driving rapid growth and expansion: costs, capital, competition, China, consumers, and climate.[7]

"The solar-power market offers perhaps one of the greatest opportunities among its clean-tech peers. Not only is the worldwide solar market growing by 30% to 50% per year, but the same technologies that enabled the semiconductor and computer revolution are now being leveraged in the solar market." (p. 20)

"Today, Brazil gets more than 30% of its automobile fuels from sugar cane-based ethanol. In the United States, ethanol is nearly a 5-billion-gallon-a-year industry, on target to reach 7.5 billion gallons (about 5% of total gasoline consumption) around 2010. One of the greatest opportunities will lie in distilling fuels and creating materials from cellulosic nonfood crops such as switchgrass and jatropha." (p. 21)

"Today’s green buildings use some 30% less energy than their comparably sized nongreen counterparts (some save much more), and they’re generally brighter, healthier, and more aesthetically pleasing. Often built with little or no additional up-front cost, green offices, for instance, pay back not only in energy savings but also in greater employee retention, attendance, and productivity." (p. 21)

"Since 2003, hybrid cars have gone from a tiny speck on the automotive landscape to one of the U.S. vehicle market’s fastest growing segments. Toyota doubled its flagship hybrid car’s allocation in North America in 2005, to 100,000, and started building hybrids on U.S. assembly lines in 2006. By the end of 2006 there were some 15 hybrid models on showroom floors, including hybrid models for such popular vehicles as the Honda Civic and Accord and the Toyota Camry." (p. 4)

In a September 2007 article in Renewable Energy Access Wilder explains that, while some hurdles remain, the key solar trends mapped out in The Clean Tech Revolution—scaling up manufacturing and driving down costs—are coming to pass:

From the Nevada desert to the roofs of Wal-Mart stores to the legendary plains of Spain, solar is entering a bold, bright new era. Each week, solar seems to be winning new enthusiasts like Forbes, new investors of all stripes, and new large-scale business users like Wal-Mart, Macy's and Kohl's. Late last month, North Carolina Governor Mike Easley signed that state's first renewable portfolio standard into law, which includes a solar set-aside.[8]