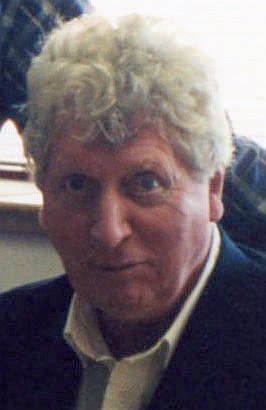 Thomas Stewart Baker (born January 20 1934), or Tom Baker, is an English actor. He is best known for playing the Fourth Doctor in the long-running science fiction television series Doctor Who.

Baker was born in Liverpool. His father was a sailor, and was Jewish. His mother was Roman Catholic. Baker was not very academic and struggled at school. He failed the eleven plus exam. Baker became a monk when he was 15.[1] When he decided to change his life, he first worked in the Royal Army Medical Corps, and then as a construction worker. He took up acting first as a hobby, then professionally.

His first big part was as Grigori Rasputin in the 1971 movie, Nicholas and Alexandra. Baker is best known for playing the Fourth Doctor in the long-running science fiction television series Doctor Who. He played this role from 1974 to 1981. When he got the job, he was working on a building site, because it was hard to find work as an actor.[2]

He is famous for playing the Doctor longer than any other actor. His version of the character is probably the best remembered by many people. As he thought of himself as a role model for children, he would always pretend to be the Doctor in real life, and sign autographs for them. He did not like to see too much violence in Doctor Who. He once changed the script so the Doctor threatened a character with a jelly baby instead of a knife.[3]

He was a narrator for the comedy sketch show Little Britain.

Baker has had many jobs as a voiceover artist. He is very recognized for his voice. In a 2005 survey of British adults, Baker's voice was the fourth most recognisable after the Queen, Tony Blair and Margaret Thatcher.[4]