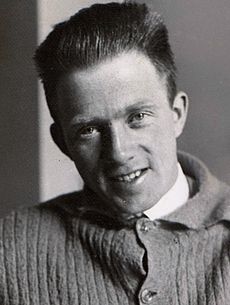 Werner Karl Heisenberg (5 December 1901 – 1 February 1976) was a German physicist. He won the Nobel Prize in Physics for his work in quantum mechanics. He discovered the Heisenberg uncertainty principle. It explains that there is a limit on how well some things can be measured.

Heisenberg was born in Wuerzburg Germany, the son of a professor of Byzantine history. He went to university to study physics in Munich. Arnold Sommerfeld was one of his teachers.

Heisenberg was a very good student and needed only three years to finish his studies. He then wrote a doctoral thesis about movements in the flows of liquids ("Über Stabilität und Turbulenz von Flüssigkeitsströmen"). In 1924 he became assistant to Max Born at the University of Göttingen and in 1926 worked with Niels Bohr at the University of Copenhagen.

Together with Born and Pascal Jordan he founded Quantum mechanics. At the age of 26 Heisenberg became professor of theoretical physics at the University of Leipzig. This was a very young age for such a job.

He was awarded the Nobel Prize when he was 31 years old.

In 1937 he married Elisabeth Schumacher. They had seven children, one of their sons is well known as a neurobiologist and geneticist, Martin Heisenberg.

After the war, he was held as a prisoner at Farm Hall in England from May 1945 to January, 1946, where the British and Americans had many other German scientists.

Later he worked in nuclear research, mainly in West Germany, but he was against nuclear weapons.