Edward Teller (January 15, 1908 – September 9, 2003) was an American theoretical physicist. He was born in Budapest, the capital city of Hungary. At the time Hungary was called Austria-Hungary. He is known as "the father of the hydrogen bomb". 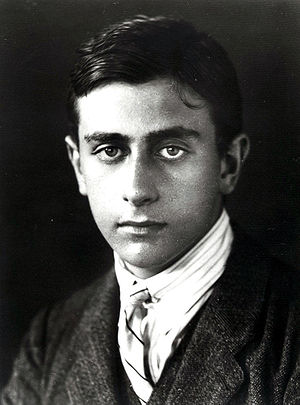 Teller's family was Jewish. Teller did not speak until he was three years old. He left Hungary in 1926. He moved to Germany. He went to the University of Karlsruhe there. He then went to the University of Leipzig. He got his Ph.D. in physics there. In 1933 Adolf Hitler became the leader of Germany. Teller decided to move so the Nazis wouldn't kill him for being a Jew. In 1934 Teller moved to Copenhagen in Denmark. He joined the Institute for Theoretical Physics there. He married Augusta Maria Harkanyi. Then Teller moved to London in England to teach at University of London.

In 1952 Teller opened Lawrence Livermore National Laboratory at the University of California with Ernest Lawrence. In 1953 Teller became a professor at the University of California. He was on the cover of TIME magazine in 1957.[1] From 1958 to 1960, Teller worked as the director of the Lawrence Livermore National Laboratory. He was the associate director until 1977.[2] The laboratory is now called Los Alamos Scientific Laboratory.

In 1979 Teller had a heart attack. He blamed it on Jane Fonda.[3] In 1982 he became a member of the White House Science Council.

In 2001 a book Teller wrote about his life, Memoirs: A Twentieth Century Journey In Science And Politics, was published by Basic Books. Teller was 93.

He died from a stroke on September 9, 2003 at Stanford University.

Teller was an agnostic.[4] He also was a Republican.[source?]