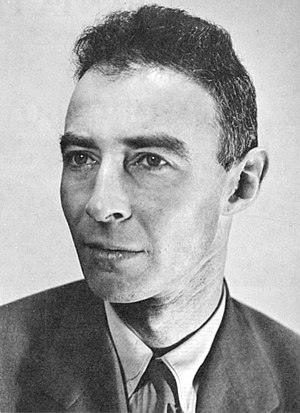 J. Robert Oppenheimer, "the father of the atomic bomb" was the first director of Los Alamos National Laboratory, beginning in 1943.

J. Robert Oppenheimer (April 22, 1904 – February 18, 1967) was an American physicist. He is best known as the scientific director of the Manhattan Project. In World War II, the project built the first nuclear weapons. That is why Oppenheimer is called "the father of the atomic bomb".

"We knew the world would not be the same", he recalled the moments after the successful testing of the atomic bomb in New Mexico, United States years later. "A few people laughed, a few people cried, most people were silent. I remembered the line from the Hindu scripture, the Bhagavad-Gita. Vishnu is trying to persuade the Prince that he should do his duty and to impress him takes on his multi-armed form and says, 'I am become Death, the destroyer of worlds.' I suppose we all thought that one way or another."

The quote from the Hindu scripture had since become one of Oppenheimer's most famous quotes.