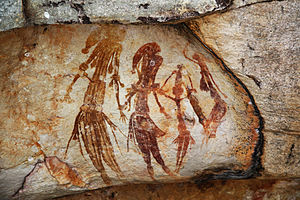 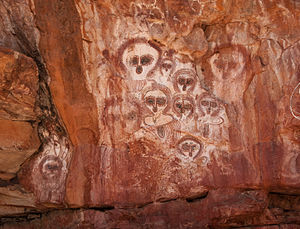 Aboriginal art is art made by indigenous Australian people. It includes work made in many different ways including painting on leaves, wood carving, rock carving, sculpting, ceremonial clothing and sand painting. Aboriginal art is closely linked to religious ceremonies or rituals. It is an important part of the world's oldest continuous cultural tradition,[1] based on totems and the Dreaming.

Australian Indigenous art is the oldest ongoing tradition of art in the world. The earliest artworks were rock carvings, body painting and ground designs, which date back more than 30,000 years.[2]

Symbols are used in aboriginal art, to show different things. While the meaning of these symbols is often shared, they can change meaning within the same piece, and they can be different between different groups. Aboriginal art is a language in itself, communicating through beautiful patterns. This started around 30,000 to 40,000 years ago.

Some aboriginal artists sell their artwork for a lot of money. In 2007 Pitjantjatjara artist Yannima Pikarli Tommy Watson sold a painting for AU$240,000.[2]

In 2010 the Queensland Government said that it would have the first two Tilt Trains painted by indigenous artists Judy Watson and Alick Tipoti.[3] With seven carriages and two locomotives, the trains will be 185 metres long, making them the biggest modern aboriginal art piece.[3] The Tilt Trains will run between Brisbane and Cairns. 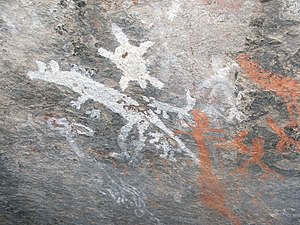 A painting of Baiame in "Baiame's cave", near Singleton, NSW. Notice the length of his arms which reach to the two trees either side.

Australian indigenous art is the oldest unbroken tradition of art in the world. The oldest dated rock art painting in Australia is a charcoal image on a rock, drawn 28,000 years ago. It is one of the oldest known pieces of rock art on Earth. It was found in the Narwala Gabarnmang rock shelter in south-western Arnhem Land in the Northern Territory.

Rock art includes painting and engraving or carving. It can be found at sites throughout Australia, but is difficult to date. Some examples in the Pilbara area of Western Australia and at Olary in South Australia are believed to be 40,000 years old.[4] Some art shows extinct animals such as Genyornis and Thylacoleo.[5][6] Other paintings show the arrival of European ships.[7]

A bark painting showing a kangaroo

The rock art at Murujuga is said to be the world's largest collection of petroglyphs.[8] It has images of animals such as the thylacine, which are now extinct.

Dot painting is made up of small dots of paint colours like yellow (representing the sun), brown (the soil), red (desert sand) and white (the clouds and the sky). These are traditional Aboriginal colours. Dot paintings can be painted on anything, including on rocks, in caves, etc. The paintings were mostly images of animals or lakes, and the Dreamtime. Stories and legends were shown on caves and rocks.

Bark painting is made on sheets of bark from trees. Bark paintings are regarded as fine art, and high prices are often paid for it on the international art markets. The best artists are recognized annually in the National Aboriginal & Torres Strait Islander Art Award.

This is a kind of maplike, bird's-eye view of the desert landscape. It is often used to tell Dreaming stories. In the distant past, these were made on rock, sand or as body painting. Today they are often colored drawings with liquid based color on canvas (see section Papunya Tula and "Dot Painting" above).

Stone arrangements are found across Australia. Some are large, such as the 50m-diameter circles of Victoria, with 1m-high stones buried in the ground. Some are small such as those near Yirrkala which show images of the praus used by Macassan Trepang fishermen and spear throwers.

Modern Aboriginal art still uses traditional symbols. While the meaning of the symbols can be the same across Australia, they can also change within in a single painting. A symbol such as a circle can be used as a circle within a circle, sometimes on its own or clustered in groups. The meaning can depend on which tribe the artist is from. The circles could be campfires, trees, hills, digging holes, water holes or a spring. The meaning can be changed by the use of colour, so water could be blue or black.[9]

Many paintings by Aboriginal artists, tell a story from the Dreamtime. These can be drawn like a map. The story shows how the land was created by ancestral beings in their journey or during creation. These paintings continue a tradition of songs, ceremonies, rock art and body art that is thousands of years old.

Whatever the meaning, interpretations of the symbols should be made in context of the entire painting, the region from which the artist originates, the story behind the painting, and the style of the painting, with additional clues being the colours used in some of the more modern works, such as blue circles signifying water.

Traditional art almost always is about the Dreamtime of indigenous Australian artists. Wenten Rubuntja, an indigenous landscape artist, says it is hard to find any art that is devoid of spiritual meaning

"Doesn't matter what sort of painting we do in this country, it still belongs to the people, all the people. This is worship, work, culture. It's all Dreaming. There are two ways of painting. Both ways are important, because that's culture." – source The Weekend Australian Magazine, April 2002

Story-telling and totem representation feature prominently in all forms of Aboriginal artwork. In some parts of Arnhem Land, the artists used an X-ray style of painting.[1]

Many important sites of Aboriginal rock paintings have been gradually damaged or destroyed by early settlers and modern-day visitors. Some sites have been cleared or built over. Other sites have been damaged by visitors touching the paint, or graffiti. Many sites are now protected by fences or closed off to the public permanently.