Thylacine was a carnivorous (mainly meat eating) marsupial animal. The Thylacine was also known as a Tasmanian tiger, a Tasmanian wolf and a Tasmanian hyena. The last known Thylacine died in a Hobart zoo on 7 September 1936.[2] They once lived across Australia and New Guinea. There are paintings of the animals in the north of Western Australia, and in the Northern Territory.[3] At Riversleigh in north Queensland, scientists have discovered the fossil bones of thylacines that are at least 30 million years old.[4]

Thylacines were common across Australia. Fossil remains have been found in Queensland, paintings have been found in Western Australia, and a mummified body was found in cave on the Nullabor Plain in South Australia. The body was dated as being 4,650 years old.[5] The thylacine began to disappear from the Australian mainland about 5,000 years ago. This is about the same time as the arrival in Australia of the dingo. Because of rising sea levels 10,000 years ago, Tasmania was separated from the Australian mainland by Bass Strait which the dingo never crossed. By the time Europeans came to Australia in 1788, the Thylacine was only living in Tasmania.

Sailors on Abel Tasman's ship in November 1642 reported seeing "tygr" footprints.[6] The French explorer, Antoine Bruni d'Entrecasteaux, found a thylacine jaw bone in 1792.[6] On May 13, 1792, he made the first confirmed sighting, which was described as being the size of a large dog, streaked with black. In 1805, Lieutenant Governor Paterson sent a description of a thylacine to Sydney. He said the animal was rare and uncommon.[6]

Thylacines were hunted because farmers said they were killing sheep. The Tasmanian government gave money to farmers for each thylacine they killed. The last thylacine shot and killed was at Mawbanna, Tasmania, on 13 May, 1930, by farmer Wilfred Batty.[5] The government brought in laws to protect them a few months before the last one died.[5] They are now extinct, which means there are no thylacines left alive anywhere in the world.[7] 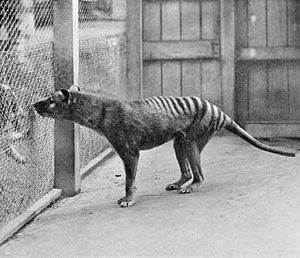 The Thylacine was about 1.8 metres (71 inches) long and its tail was up to 53 cms (21 inches) long. It would have been about 58 centimetres (23 inches) tall and could be up to 30 kilograms (66 pounds) in weight. It was grey and brown in colour with 16 black or brown stripes on its back. It had the same shape as a dog, but the back, rump and tail were more like a kangaroo. Its tail was quite stiff. It had very short legs.[8] It had teeth like a dog, but with more incisor teeth. The Thylacine was able to open its mouth about 120 degrees.[5]

The thylacines were marsupials, which means the female carried the babies in a pouch. The pouch opened to the rear.[5]