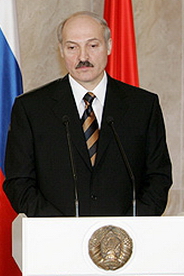 Alexander Grigoryevich Lukashenko (born 30 August 1954) is the President of the country of Belarus. He has been its leader since 1994. He was the first leader of the country to be chosen by Belarus citizens.

Before becoming the leader, he belonged to the law making section of the government. He was also in the military of the Soviet Union and ran a factory that made things to help farming.

His re-election in 2020 was seen as controversial with many saying it was rigged and unfair. His re-election caused many to protest against the election results.[9] After the contested election, the European Union, the United Kingdom, Canada, Ukraine and the United States do not recognize him as the legitimate president of Belarus.[10][11][12]

In July 2020, he said that he had COVID-19 after telling people that to avoid the disease they should drink vodka.[13]