Keys was born on January 25, 1981, in Hell's Kitchen, Manhattan, New York City, New York.[2] Her birth name is Alicia Augello Cook. She is the only child of Teresa Augello, a paralegal and part-time actress, and Craig Cook, a flight attendant. Her mother is of half Italian and half English, Irish, and Scottish ancestry,[3] and her father is of African American ancestry.[4] Keys has expressed that she was comfortable with her mixed race heritage because she felt she was able to "relate to different cultures".[5]

Alicia Keys is half Black, half White. She identifies herself as African American. She grew up in a Black neighborhood. Her music has primarily jazz, blues or piano interludes. 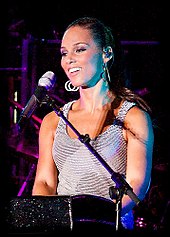