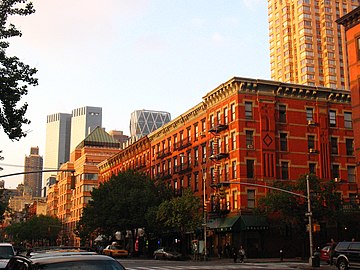 Hell's Kitchen, also known as Clinton and Midtown West, is a neighborhood of Manhattan in New York City (U.S.). It is the area on the West Side of Manhattan. It is between 34th Street and 59th Street, from 8th Avenue to the Hudson River.

The neighborhood has transportation, hospital and warehouse infrastructure for the Midtown Manhattan business district. Its bad reputation made real estate prices in the area lower than much of the rest of Manhattan until the early 1990s.

Once a center of poor and working-class Irish Americans, over the last three decades of the 20th century and into the new millennium, Hell's Kitchen has undergone change as a result of its location at Midtown. The 1969 edition of the Plan for New York City book, authored by the City Planning Commission, stated that people of modest means were being driven from the area by development pressures due to the Midtown location. Today, many actors live in the neighborhood due to its closeness to the Broadway theaters and Actors Studio training school.

"Hell's Kitchen" generally refers to the area from 34th to 59th streets, southwest of Central Park. Starting west of 8th Avenue, city zoning regulations limit buildings to 6 stories high (although exceptions are often made). As a result, most of the buildings are older, often walk-ups. For the most part the neighborhood covers the ZIP codes 10019 and 10036. The post office for 10019 is known as Radio City Station, the original name for Rockefeller Center on Sixth Avenue.

Hell's Kitchen gear for sale in the Video Cafe on Ninth Avenue.

Several different explanations exist for the original name. An early use of the phrase appears in a comment Davy Crockett made about another notorious Irish slum in Manhattan, Five Points. According to the Irish Cultural Society of the Garden City Area:

When, in 1835, Davy Crockett said, '"In my part of the country, when you meet an Irishman, you find a first-rate gentleman; but these are worse than savages; they are too mean to swab hell's kitchen." He was referring to the Five Points.[1]

According to an article by Kirkley Greenwell, published online by the Hell's Kitchen Neighborhood Association:

No one can pin down the exact origin of the label, but some refer to a tenement on 54th Street as the first "Hell's Kitchen." Another explanation points to an infamous building at 39th as the true original. A gang and a local dive took the name as well.... a similar slum also existed in London and was known as Hell's Kitchen.[2]

Local historian Mary Clark adds a story when she states the name:

...first appeared in print on September 22, 1881 when a New York Times reporter went to the West 30s with a police guide to get details of a multiple murder there. He referred to a particularly infamous tenement at 39th Street and 10th Avenue as "Hell's Kitchen," and said that the entire section was "probably the lowest and filthiest in the city." According to this version, 39th Street between 9th and 10th Avenues became known as Hell's Kitchen and the name was later expanded to the surrounding streets. Another version ascribes the name's origins to a German restaurant in the area known as Heil's Kitchen, after its proprietors [Heil, not "hell"]. But the most common version traces it to the story of Dutch Fred The Cop, a veteran policeman, who with his rookie partner, was watching a small riot on West 39th Street near 10th Avenue. The rookie is supposed to have said, "This place is hell itself," to which Fred replied, "Hell's a mild climate. This is Hell's Kitchen."[3]

Today, most residents of the area, and most New Yorkers in general, refer to the area as "Hell's Kitchen", with "Clinton" being the name favored by the municipality, "gentrifiers", and eager real estate agents.