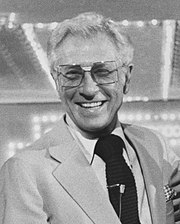 Allen Ludden (Allen Packard Ellsworth; October 5, 1917 – June 9, 1981) was an American television personality and game show host. Ludden was well known for hosting many game shows. He hosted Password and Password Plus between 1961 and 1980.