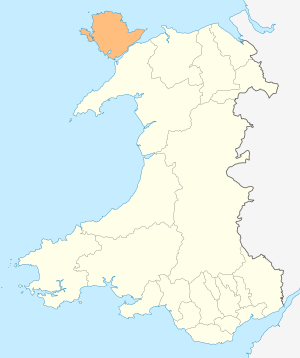 Anglesey (Welsh: Ynys Môn) is an island and county in Wales. There is a town there called Llanfairpwllgwyngyllgogerychwyrndrobwllllantysiliogogogoch. It is the longest place name in the United Kingdom. The island has a population of 68,900 people. Its largest town is Holyhead.

Around 7 out of 10 people on Anglesey speak Welsh, which is quite high. There are many small villages on the island. Anglesey is the home of Actress Naomi Watts, and founder of the English rock band Motörhead, Ian "Lemmy" Kilmister.

Anglesey does not have a capital. Instead, it has a County Council Office in the town of Llangefni. It was once famous for its markets. There are lots of good beaches on the island. A ferry between the island and Ireland is located at Holyhead which is the largest town on the island. There is also a small tidal island called Llanddwyn island. On the island there are ruins of a church, a large lighthouse and a Christian cross. Anglesey is quite a flat island but there are several hills near the middle of the island and one larger hill in the west of the island.

The oldest suspension bridge carrying a main road joins Anglesey to the rest of Wales. It is called the Menai Bridge and is shares its name with the town on the Anglesey end of the bridge.