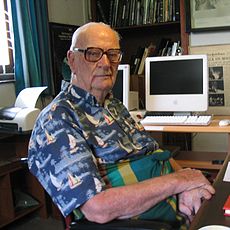 Sir Arthur Charles Clarke (Minehead, Somerset, 6 December 1917 – Colombo, Sri Lanka, 19 March 2008) was a British author and inventor. He was most famous for his science fiction novel 2001: A Space Odyssey, and for working with director Stanley Kubrick on the movie of the same name. Clarke and Isaac Asimov were probably the two best-known science fiction writers of their day.

Clarke emigrated to Sri Lanka in 1956 largely to pursue his interest in scuba diving;[5] that year, he discovered the underwater ruins of the ancient Koneswaram temple in Trincomalee. He lived in Sri Lanka until his death. He was knighted by Queen Elizabeth II in 1998,[6][7] and was awarded Sri Lanka's highest civil honour, Sri Lankabhimanya, in 2005.[8]