The Assyrian Genocide was a genocide by the Ottoman Empire, in which over 300,000 Assyrians were killed during raids and massacres.

The name goven to this is the "Sayfo" which is the Aramaic word for sword. Many Assyrians were considered unpure by the Turks and were massacred for not submitting their Christian identity. Assyrians lost their homes and possessions to the Sultan-Adulhamed the Red and even before the genocide—they were persecuted and forced to pay high taxes.

Since ancient times and conquest by the Babylonian, the Assyrians have not have had their own nation. It was called a diaspora and they have spread over to many different countries. Under the Arabs and Turks, they were oppressed and assimilated to society and many lost their independence. Those that survive continue to have a common unity especially in their deep Christian faith.

Overview of the Massacre 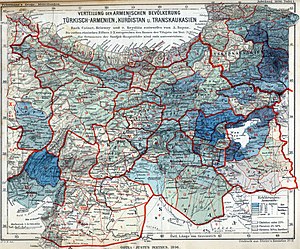 The Washington Post and other leading newspapers in Western countries reported on the Assyrian Genocide as it unfolded.

The Assyrian Genocide (also known as Sayfo or Seyfo) was committed against the Assyrian population of the Ottoman Empire during the First World War by the Young Turks.[2] The Assyrian population of northern Mesopotamia (the Tur Abdin, Hakkari, Van, Siirt regions of present-day southeastern Turkey and the Urmia region of northwestern Iran) was forcibly relocated and massacred by Ottoman (Turkish) and Kurdish forces between 1914 and 1920 under the regime of the Young Turks.[3] Scholars have placed the number of Assyrian victims from 300,000-750,000.[4][5][6][7]