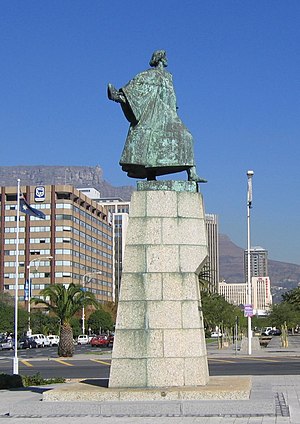 A statue of Bartolomeu Dias in Cape Town

Bartolomeu Dias(or Bartholomew Dias, 1450 - May 29, 1500) was a Portuguese explorer who was the first European to sail past the Cape of Good Hope.

In 1487, King John II of Portugal asked Dias to search for the land of a legendary Christian king named Prester John in the east. In 1488 Bartholomew and his sailors sailed along the western coast of Africa. They got caught in a storm and landed at a cape in southern Africa and they could not sail beyond that point. They named it "Cape of Storms" and later returned to Portugal. The king of Portugal considered it as a victory gained by the Portuguese adventurers and named it as "Cape of Good Hope". Because Prester John did not really exist, they did not find his country but the route from the Atlantic Ocean to the Indian Ocean leading to Asia turned out to be valuable.

Commanding a ship in Pedro Álvares Cabral's later expedition to Brazil he died at sea in 1500 during a storm. There was a statue made for him later in Cape Town, South Africa.