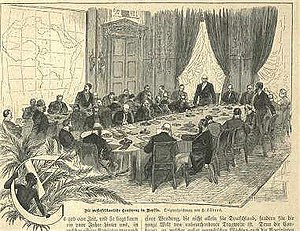 The conference of Berlin

The Berlin Conference (or "Congo Conference") of 1884–85 made rules for European colonization and trade in Africa. It was called for by Portugal and organized by Otto von Bismarck. The conference met during the Scramble for Africa, a time with more colonial activity by European powers. Africans were not invited. It ended most existing forms of African autonomy and self-governance, assuring that the European powers would not have to fight among themselves for dominance.

By 1902, 90% of all the land that makes up Africa was under European control.