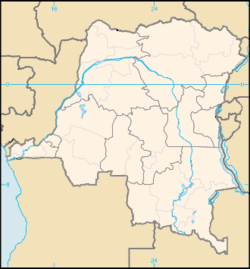 The river running through Democratic Republic of the Congo 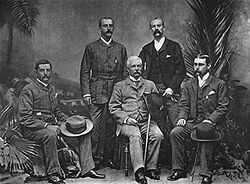 The Congo River (also known as Zaire River) is the largest river in Africa. Its overall length of 4,700 km (2,922 miles) makes it the second longest in Africa (after the Nile). The river and its tributaries flow through the second largest rain forest area in the world,[1] second only to the Amazon Rainforest in South America.

The river also has the second-largest flow in the world, behind the Amazon, and the second-largest watershed of any river, again trailing the Amazon. Its watershed is a little larger than that of the Mississippi River. Because large parts of the river basin sit north and south of the equator, its flow is steady, as there is always at least one river having a rainy season.[2] The Congo gets its name from the old Kingdom of Kongo which was at the mouth of the river. The Democratic Republic of the Congo and the Republic of the Congo, both countries sitting along the river's banks, are named after it. From 1971 to 1997, the Democratic Republic of the Congo was called Zaire and its government called the river the Zaire River.

The sources of the Congo are in the Highlands and mountains of the East African Rift, as well as Lake Tanganyika and Lake Mweru, which feed the Lualaba River. This then becomes the Congo below Boyoma Falls. The Chambeshi River in Zambia is usually taken as the source of the Congo because of the accepted practice worldwide of using the longest tributary, as with the Nile River.

The Congo flows mostly west from Kisangani just below the falls, then slowly bends southwest, passing by Mbandaka, joining with the Ubangi River, and running into the Pool Malebo (Stanley Pool). Kinshasa (formerly Léopoldville) and Brazzaville are on opposite sides of the river at the Pool, where the river narrows and falls through a few cataracts in deep canyons (collectively known as the Livingstone Falls), running by Matadi and Boma, and into the sea at the small town of Muanda.

The mouth of the Congo was visited by Europeans in 1482, by the Portuguese Diogo Cão, and in 1817, by a British exploration under James Kingston Tuckey that went up the river as far as Isangila. Henry Morton Stanley was the first European to travel along the whole river.

Although the Livingstone Falls stop ships coming in from the sea, almost all of the Congo is navigable in parts, especially between Kinshasa and Kisangani. Railways cross the three major falls that interrupt navigation, and much of the trade of central Africa passes along the river. Goods include copper, palm oil, sugar, coffee, and cotton. The river can also be valuable for hydroelectric power, and Inga Dams below Pool Malebo have been built.

In February of 2005, South Africa's state owned power company, Eskom, said that they had a proposal to increase the amount of electric power that the Inga can make through improvements and the building of a new hydroelectric dam. The project would bring the highest output of the dam to 40 GW, twice that of China's Three Gorges Dam.[3]

In the Mesozoic period before the continental drift opened the South Atlantic Ocean, the Congo was the upper part of a river about 12,000 km (7,500 miles) long that flowed west across the parts of Gondwanaland, now called Africa and South America.

Listed from down a river, to up a river:

The Congo River was the location the novel Heart of Darkness by Joseph Conrad.