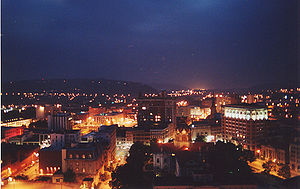 Binghamton is a city in the U.S. state of New York. It is near Pennsylvania, and sits along the Susquehanna River. In 2010, 47,376 people lived in the city, while 251,725 people lived in the metropolitan area. In the past, Binghamton was known for making cigars, shoes, and computers. IBM started in the Binghamton area. Today, the area is home to Binghamton University.