Bury St Edmunds is a town in the county of Suffolk, England. It is the main town in the borough of St. Edmundsbury and known for the ruined abbey near the town centre. The town linked to the Magna Carta; in 1214 the barons of England are believed to have met in the Abbey Church and promised to force King John to accept the Charter of Liberties, the document which influenced the creation of the Magna Carta. It was also the setting for two witch trials.[2][3] one of which was used as a reference in the Salem Witch Trials.[3][4][5] During the Second World War, the USAAF operated an airfield outside the town. It is also called 'Suffolk's Floral Town' due to the abbey gardens and amounts of rural land.[6]

Near the gardens stands Great Britain's first internally illuminated street sign called the Pillar of Salt. When built, it needed permission because it did not conform to regulations. Bury St Edmunds is where the A1101 road, Britain's lowest road, ends. There is a network of tunnels which prove that chalk-workings took place nearby,[7] though there is no evidence of a lot of tunnels under the town centre. Some buildings have cellars which lead into each other. Due to their unsafe nature the chalk-workings are not open to the public, although viewing is allowed to some people. Some tunnels have caused subsidence in living history.

Among interesting buildings is St Mary's Church. The Tudor King Henry VIII's sister, Mary Tudor, was re-buried in Bury's St Mary's Church, after being moved from the Abbey after her brother's dissolution of the Church six year after her death. Queen Victoria had a stained glass window fitted into the church to commemorate Mary's interment.[8]

On 3 March, 1974 a Turkish Airlines DC-10 jet crashed near Paris in France killing all 346 people on board. Among the victims were 17 members of Bury St Edmunds rugby club.

The town council election on 3 May 2007 was won by the "Abolish Bury Town Council" party.[9] The party lost its majority following a by-election in June 2007 and, to date, the Town Council is still in existence.[10]

The name borough comes from of Bury, which has cognates in other Germanic languages such as the Old Norse "borg" meaning "wall, castle"; and Gothic "baurgs" meaning "city". They all derive from Proto-Germanic *burgs meaning "fortress". This in turn derives from the Proto-Indo-European root *bhrgh meaning "fortified elevation", with cognates including Welsh "bera", "stack" and Sanskrit bhrant- "high, elevated building".

In the centre of Bury St Edmunds there is the remains of an abbey, surrounded by the Abbey Gardens, a park. The abbey is a shrine to Saint Edmund, the Saxon King of the East Angles, who was killed by the Danes in 869AD. The town grew around Bury St Edmunds Abbey, a site of pilgrimage, and developed into a flourishing cloth-making town by the 14th century.

The abbey was largely destroyed during the 16th century with the dissolution of the monasteries but Bury remained prosperous throughout the 17th and 18th centuries. It fell into relative decline with the industrial revolution.

The Abbey Gardens which surround the ruins had an Internet bench installed in the late 1990s, which portable computers to connect to the Internet. It was the first bench of its kind, though within the first week two teenagers discovered they could also make free telephone calls from the bench. They phoned the Borough Council (owner of the bench) to notify them, then attempted to contact Bill Gates, founder of Microsoft, to tell him.[11] 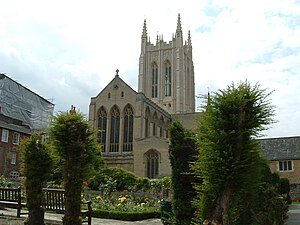 St Edmundsbury Cathedral from the east

Bury St Edmunds Cathedral was created when the Diocese of St Edmundsbury and Ipswich was formed in 1914. The cathedral was extended with an eastern end in the 1960s, commemorated by Benjamin Britten's Fanfare for St Edmundsbury, and a new Gothic revival cathedral tower was built as part of a millennium project running from 2000 to 2005. The opening for the tower took place in July 2005, and included a brass band concert and fireworks. Parts of the cathedral remain uncompleted, including the cloisters. Many areas remain inaccessible to the public due to building work. The tower makes St Edmundsbury the only recently completed Anglican cathedral in the UK, and only a handful of Gothic revival cathedrals are being built worldwide. The tower was constructed using original fabrication techniques by six masons who placed the machine pre-cut stone individually as they arrived.

The Theatre Royal, Bury St Edmunds was built by National Gallery architect William Wilkins in 1819. It is the sole surviving Regency Theatre in the country . The theatre, owned by the National Trust underwent restoration between 2005 and 2007. Appeal patron Dame Judi Dench:

It presents a full programme of performances and is also open for public tours.

Moyse's Hall Museum is one of the oldest (c. 1180) domestic buildings in East Anglia open to the public. It has collections of fine art, for example Mary Beale, costume, e.g. Charles Frederick Worth, horology, local and social history; including Red Barn Murder and Witchcraft.[12]

The town holds a festival in May. This including concerts, plays, dance, and lecturers culminating in fireworks. Bury St Edmunds is home to England's oldest Scout group, 1st Bury St Edmunds (Mayors Own).

The town's football club, Bury Town, are the fourth oldest non-league team in England.[13] They are members of the Isthmian League Division One North. 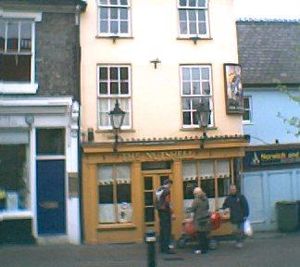 The Greene King brewery is in Bury. The other brewery is The Old Cannon Brewery and public house on Cannon Street near the railway station. The brewing vessels, made for an exhibition in Japan in 1997, can be seen in the front room. Just outside the town is Bartrums Brewery, on Rougham airfield but originally in Thurston.

Another beer-related landmark is Britain's smallest public house, The Nutshell, which is on The Traverse, just off the marketplace.

Bury's largest landmark is the British Sugar factory near the A14, which processes sugar beet into refined crystal sugar. It was built in 1925 and processes beet from 1,300 growers. 660 lorry loads of beet can be accepted each day when beet is being harvested. Not all the beet can be crystallised immediately, and some is kept in solution in holding tanks until late spring and early summer, when the plant has spare crystallising capacity. The sugar is sold under the Silver Spoon name (the other major British brand, Tate & Lyle, is made from imported sugar cane). By-products include molassed sugar beet feed for cattle and LimeX70, a soil improver. 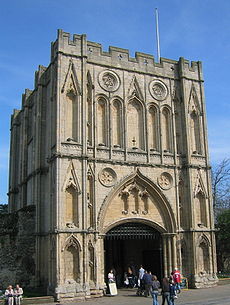 The Abbeygate, a local symbol of the town

Although not from Bury St Edmunds, BBC Radio 1 DJ John Peel lived nearby in Great Finborough and on 12 November 2004 his funeral took place at the cathedral.[14] It was attended by a thousand people including many artists he had championed. During a peak of local musical activity in Bury St Edmunds in 2002, he referred (tongue-in-cheek) to the town as 'The New Seattle'.[15]

Actor Ian McShane was given freedom of the borough in 1996 after he played the title role in the television series Lovejoy, filmed in and around Bury.

Bury St Edmunds is birthplace of James Moore winner of the world's first cycle race and of the first long-distance road race, from Paris to Rouen