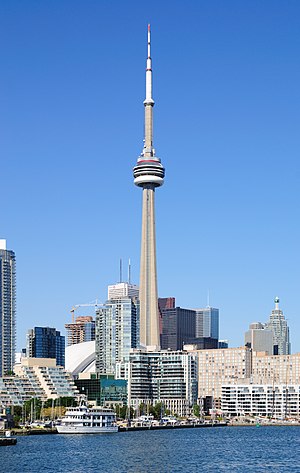 The CN Tower is a communications and tourist tower in Toronto, Ontario, Canada. It is 553.33 metres (1,815.39 ft) tall.[1] It became taller than the Ostankino Tower in Moscow while it was still being built in 1975, becoming the tallest free-standing structure on land in the world. The Burj Khalifa, while it was still being built, became taller than the CN Tower on September 12, 2007 .[2] It is an important icon of Toronto and has more than two million visitors every year. It is the tallest structure in Canada.[3]

The "CN" in the tower's name came from the Canadian National Railway, the railway company that built the tower. In 1995, the railway sold the tower to the Canada Lands Company (CLC). Local residents wanted to keep the name CN Tower, though, so the abbreviation is now a shortened form of Canada's National Tower instead of the original Canadian National Tower. Neither of these names are commonly used, though; the tower is usually called the CN Tower.[4]