Carcoar was once one of the most important government centres in Western New South Wales. The town has been classified by the National Trust. This is because it has a lot of buildings from the 1800's. Carcoar is a Aboriginal word from the Gundungura people meaning either frog or kookaburra.

Nearby towns are Blayney, Millthorpe, Mandurama, Neville, Lyndhurst and Barry.

The first people to live in the area were the Gundungura people. The first Europen to travel through the area was surveyor George Evans. He came from Bathurst in 1815 and set up his camp on Coombing Creek.

The first settlers arrived in 1821. The first official land grant, 560 acres (2.3 km²), was given to Thomas Icely on 26 May 1829. He named his farm Coombing Park. In 1838 Thomas Icely asked that a village be started to supply items for his big farm. On 29 September 1839 Carcoar became the third town west of the Blue Mountains.

The first land for houses in the town were sold in 1840. By 1850 Carcoar was the second biggest town west of the mountains. It was second in size to Bathurst. It became a banking and government centre for the area. In 1857 the town's public school opened. It is one of the oldest schools in Australia.

When gold was found in the west in the 1860's, Carcoar became less important. The government began building a number of important buildings in the late 1870s. At this time, Coombing Park was supplying iron ore to the Lithgow steelworks.

The Stoke Stable Museum, built by convict labour in 1849 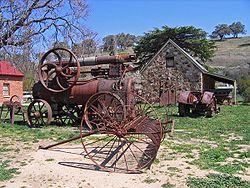 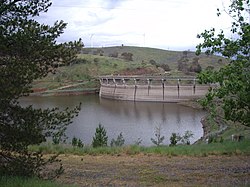 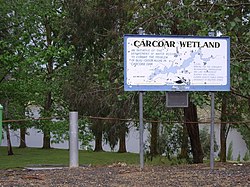 Because the town is at the bottom of a steep valley it wasn't suitable for the railway. The railway line went to Blayney 13 km (8 mi) north west in 1874. By the early 1880s many people had left the town. Carcoar was joined to the railway line in 1888 when the Blayney-Demondrille Line.

In the 1980s train services were stopped between Cowra and Blayney. This included included Carcoar. This section was re-opened by the Lachlan Valley Railway. The LVR run tourist trains, mainly from Cowra to Blayney and Canowindra. They have now moved into general freight haulage.

Carcoar's was often visited by escaped convicts and bushrangers. They came into the town and robbed many times.

In one robbery, German Charley tried to stop Mickey Bourke from stealing a racehorse from the Coombing Park stables. He was shot dead by Bourke. Another bushranger, Curran was captured by the local police. The government sent extra police and a magistrate to the town. Frank Gardiner was working in the area after six years gaol for stealing horses. He gave up farm work and started stealing cattle.

In 1863 Johnny Gilbert and John O'Meally tried to rob the Commercial Bank. This may be Australia's first daylight bank robbery. Both bushrangers ran away when a bank worker fired a shot into the ceiling of the bank.

The Presbyterian Reverend James Adam was held up by Ben Hall. Hall liked the Adam and didn't rob him.

In recent years the town has been used as a location for many movie and television productions. This includes: